Exactly 317 years ago, Captain William Kidd was tried and executed for piracy. Whether or not he was a pirate is debatable but what is not under dispute is that people do like to pirate. Throughout the human history, whenever there was opportunity, there was also theft. Wait…, is theft the same as piracy?

If we talk about Captain “Arrr… me mateys” sailing the high seas under the “Jolly Roger” flag, there is no legal or ethical dispute that piracy is equivalent with theft. But what about today’s digital piracy? Despite what the grieved parties may vociferously advocate, digital piracy is not theft because what is being stolen is a copy of the goodie, not the goodie itself therefore it is an infringement and not an actual theft. That’s from a legal standpoint. Ethically though…

For Eres et al. (2016), theft is theft, whether the object of thievery is tangible or not. So why are people who have no problem pirating information from the internet squeamish when it comes to shoplifting the same item?

In a different experiment, Eres et al. (2016) stuck 35 people in the fMRI and asked them to imagine the tangibility (e.g., CD, Book) or intangibility (e.g., .pdf, .avi) of some items (e.g., book, music, movie, software). Then they asked the participants how they would feel after they would steal or purchase these items.

People were inclined to feel more guilty if the item was illegally obtained, particularly if the object was tangible, proving that, at least from an emotional point of view, stealing and infringement are two different things. An increase in the activation the left lateral orbitofrontal cortex (OFC) was seen when the illegally obtained item was tangible. Lateral OFC is a brain area known for its involvement in evaluating the nature of punishment and displeasurable information. The more sensitive to punishment a person is, the more likely it is to be morally sensitive as well.

Or, as the authors put it, it is more difficult to imagine intangible things vs. physical objects and that “difficulty in representing intangible items leads to less moral sensitivity when stealing these items” (p. 374). Physical items are, well…, more physical, hence, possibly, demanding a more immediate attention, at least evolutionarily speaking. 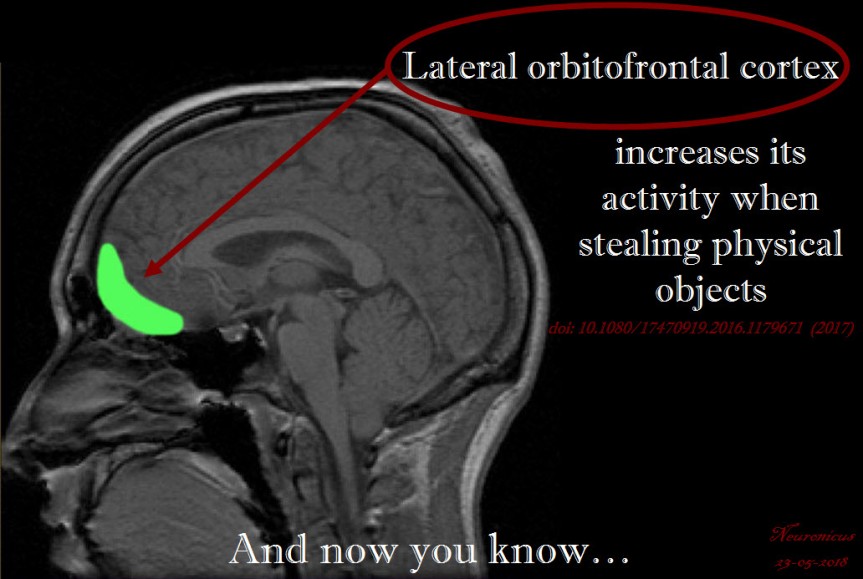 Like most social neuroscience imaging studies, this one lacks ecological validity (i.e., people imagined stealing, they did not actually steal), a lacuna that the authors are gracious enough to admit. Another drawback of imaging studies is the small sample size, which is to blame, the authors believe, for failing to see a correlation between the guilt score and brain activation, which other studies apparently have shown.

A simple, interesting paper providing food for thought not only for the psychologists, but for the law makers and philosophers as well. I do not believe that stealing and infringement are the same. Legally they are not, now we know that emotionally they are not either, so shouldn’t they also be separated morally?

But value…, well, that’s where it gets complicated, isn’t it? Because just as intangible as an .mp3 is the dignity of a fellow human, par example. What price should we put on that? What punishment should we deliver to those robbing human dignity with impunity?

Ah, intangibility… it gets you coming and going.

I got on this thieving intangibles dilemma because I’m re-re-re-re-re-reading Feet of Clay, a Discworld novel by Terry Pratchett and this quote from it stuck in my mind:

“Vimes reached behind the desk and picked up a faded copy of Twurp’s Peerage or, as he personally thought of it, the guide to the criminal classes. You wouldn’t find slum dwellers in these pages, but you would find their landlords. And, while it was regarded as pretty good evidence of criminality to be living in a slum, for some reason owning a whole street of them merely got you invited to the very best social occasions.”

While EU is moving on with legislation to curtail harmful chemicals from our food, water, and air, USA is taking a few steps backwards. The most recent de-regulation concerns chlorphyrifos (CFP), a horrible pesticide banned in EU in 2008 (and in most of the world. China also prohibited its use on produce in 2016). CFP is associated with serious neurodevelopmental defects in humans and is highly toxic to the wildlife, particularly bees.

The paper that I’m covering today wanted to see if there is anything the consumer can do about pesticides in their produce. Unfortunately, they did not look at CFP. And why would they? At the time this study was conducted they probably thought, like the rest of us, that CFP is over and done with [breathe, slowly, inhale, exhale, repeat, focus].

Yang et al. (2017) bought organic Gala apples and then exposed them to two common pesticides: thiabendazole and phosmet (an organophosphate) at doses commonly used by farmers (125 ng/cm2). Then they washed the apples in three solutions: sodium bicarbonate (baking soda, NaHCO3, with the concentration of 10 mg/mL), Clorox (germicidal bleach with the concentration of 25 mg/L available chlorine) and tap water.

Before and after the washes the researchers used surface-enhanced Raman spectroscopy (which is, basically, a special way of doing microscopy) to take a closer look at the apples.

They found out that:

2) The more you wash the more pesticide you remove. If you immerse apples in backing soda for 12 minutes for thiabendazole and 15 minutes for phosmet and then rinse with water there will be no detectable residue of these pesticides on the surface.

3) “20% of applied thiabendazole and 4.4% of applied phosmet penetrated into apples” (p. 9751) which cannot be removed by washing. Thiabendazole penetrates into the apple up to 80μ, which is four times more than phosmet (which goes up top 20 μm).

5) Phosmet is completely degraded by baking soda, whereas thiabenzole appears to be only partially so.

True to my nitpicking nature, I wish that the authors washed the apples in tap water for 8 minutes, not 2, like they did for Clorox and baking soda in the internal pesticide residue removal experiment. Nevertheless, the results stand as they are robust and their detection method is ultrasensitive being able to detect thiabendazole as low as 2μg/L and phosmet as low as 10 μg/L.

Thiabendazole is a pesticide that works by interfering with a basic enzymatic reaction in anaerobic respiration. I’m an aerobe so I shouldn’t worry about this pesticide too much unless I get a huge dose of it and then it is poisonous and carcinogenic, like most things in high doses. Phosmet, on the other hand, is an acetylcholinesterase (AChE) inhibitor (AChEI), meaning its effects in humans are akin to cholinergic poisoning. Normally, acetylcholine (ACh) binds to its muscarinic and nicotinic receptors in your muscles and brain for proper functioning of same. AChE breaks down ACh when is not needed any more by said muscles and brain. Therefore, an AChEI stops AChE from breaking down ACh resulting in overall more ACh than it’s good for you. Meaning it can kill you. Phosmet’s effects, in addition to, well…, death from acute poisoning, include trouble breathing, muscle weakness or tension, convulsions, anxiety, paralysis, quite possible memory, attention, and thinking impairments. Needles to say, it’s not so great for child development either. Think nerve gas, which is also an AChEI, and you’ll get a pretty good picture. Oh, it’s also a hormone mimicker.

I guess I’m back buying organic again. Long ago I have been duped for a short while into buying organic produce for my family believing, like many others, that it is pesticide-free. And, like many others, I was wrong. Just a bit of PubMed search told me that some of the “organic” pesticides are quite unpleasant. But I’ll take copper sulfate over chlorphyrifos any day. The choice is not from healthy to unhealthy but from bad to worse. I know, I know, the paper is not about CFP. I have a lot of pet peeves, alright?