Whoever didn’t roll out a tongue to catch a few snowflakes? Probably only those who never encountered snow.

The bad news is that snow, particularly urban snow is bad, really bad for you. The good news is that this was not always the case. So there is hope that in the far future it will be pristine again.

Nazarenko et al. (2016) constructed a very clever contraption that reminds me of NASA space exploration instruments. The authors refer to this by the humble name of ‘environmental chamber’, but is in fact a complex construction with different modules designed to measure out how car exhaust and snow interact (see Fig. 1).

After many experiments, researchers concluded that snow absorbs pollutants very effectively. Among the many kinds of organic compounds soaked by snow in just one hour after exposure to fume exhaust, there were the infamous BTEX (benzene, toluene, ethylbenzene, and xylenes). The amounts of these chemicals in the snow were not at all negligible; to give you an example, the BTEX concentration increased from virtually 0 to 50 and up to 380 ug kg-1. The authors provide detailed measurements for all the 40+ compounds they have identified.

Needless to say, many these compounds are known carcinogenics. Snow absorbs them, alters their size distributions, and then it melts… Some of them may be released back in the air as they are volatile, some will go in the ground and rivers as polluted water. After this gloomy reality check, I’ll leave you with the words of the researchers:

“The accumulation and transfer of pollutants from exhaust – to snow – to meltwater need to be considered by regulators and policy makers as an important area of focus for mitigation with the aim to protect public health and the environment” (p. 197). 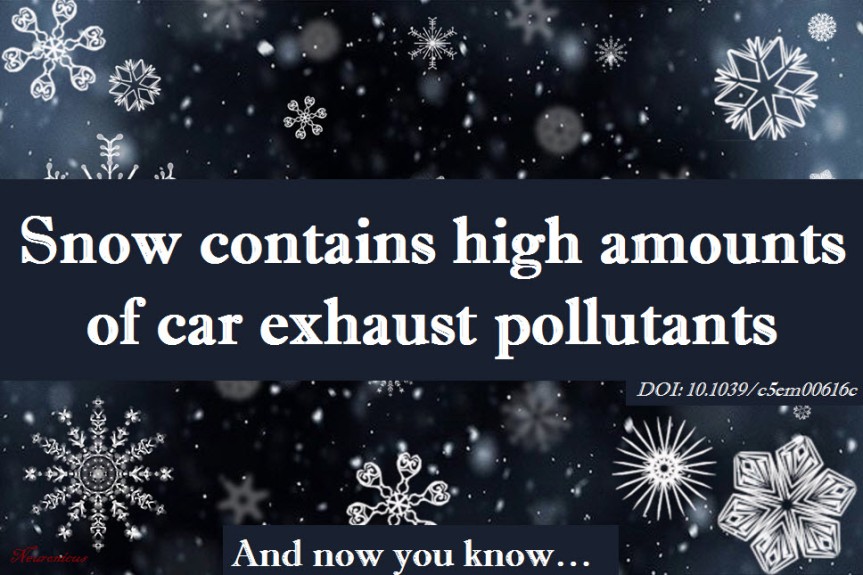