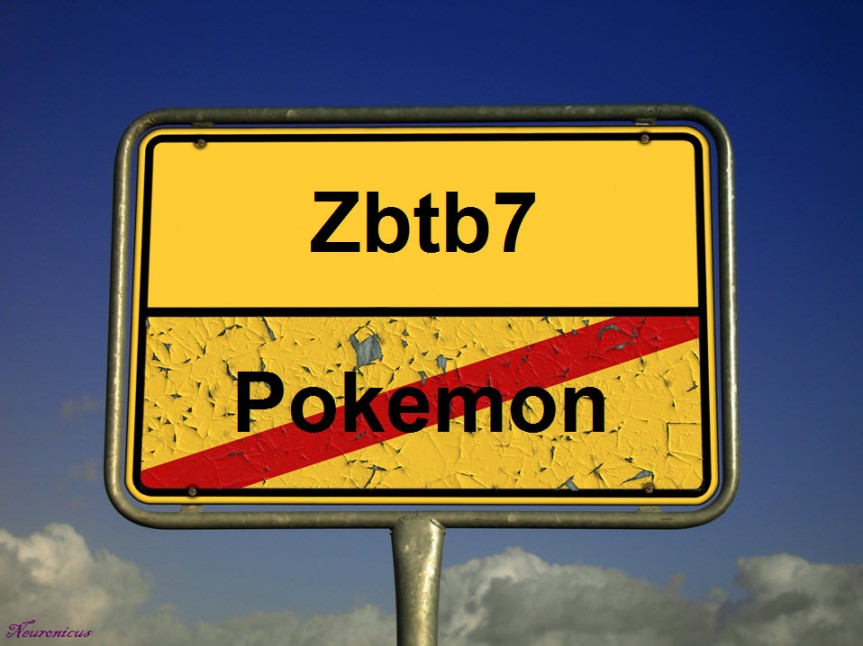 Few people know that Pokemon refers not only to a game, but also to a gene. An oncogene, to be precise, with a rather strange story.

An oncogene is a gene that promotes cancer (from oncology). Conventionally, a gene name is written in lowercase italicized letters (pokemon), whereas the protein the gene makes is not italicized (POKEMON, Pokemon, or pokemon, depending on the species). Maeda et al. (2005) first established in a Petri dish that the Pokemon is required for the growth of malignant tumors. Then, through a series of classic molecular biology experiments, the scientists found out how exactly Pokemon acts to accomplish this (by suppressing the expression of anti-cancer genes). Next, they engineered mice with pokemon overexpressed and saw that the mice with a lot of Pokemon “developed aggressive tumours” (p. 282). Then the authors checked how is this gene behaving in human cancers and found out that “Pokemon is expressed at very high levels in a subset of human lymphomas” (p. 284).

And here is how the gene got its name, according to Pier Paolo Pandolfi, the leader of the research group. Bear with me because it’s complicated. [*Takes deep breath*]: PO in POK stands for POZ domain (poxvirus and zinc finger) and K in POK stands for Krüppel (zinc finger transcription factor) whereas EMON stands for erythroid myeloid ontogenic factor. POK-EMON. Simple, eh? Phew…

Truth be told, Pandolfi first named the gene pokemon at a conference in 2001 (Simonite, 2005). Then the name has been used by researchers at various scientific meetings and poster presentations.

But when the Maeda et al. paper was published in Nature in 2005 which discovered the mechanism through which the gene promotes cancer, a lot of people, scientists and journalists alike, in an attempt at humour, flooded the internet with eye-catching titles along the lines of “Pokemon causes cancer”, “Pokemon kills you” and the like. I mean, even the researchers themselves in the abstract of the paper state: “Pokemon is aberrantly overexpressed in human cancers”. In response, The Pokémon Company threatened to sue for trademark copyright infringement because they didn’t want the game to be associated with cancer, like the gene is, even if the researches said the name is an acronym (maybe they meant backronym?). In the end, the researchers changed the name of the pokemon gene to the far less enticing zbtb7.

As the question mark in the title of the post suggests, the pokeman gene may not be entirely dead yet because there are stubborn scientists that still use the name pokemon and not zbtb7. I hope they have the cash to take on Nintendo if they decide to sue after all.

Too bad the zbtb7 (a.k.a. pokemon) gene was not a beneficial gene… Because another group of researchers named their new-found gene in 2008 pikachurin and so far, Nintendo din not make any waves… That is, probably, because Pikachurin is a protein in the eye retina that is required for proper vision by speeding the electric signals. Zip zip zip Pikachurin goes…