I have begun this blogpost many times. I have erased it many times. That is because the subject of today – handwriting – is very sensitive for me. Most of what I wrote and subsequently erased was a rant: angry at rimes, full of profanity at other times. The rest were paragraphs that can be easily categorized as pleading, bargaining, imploring to teach handwriting in American schools. Or, if they already do, to do it less chaotically, more seriously, more consistently, with a LOT more practice and hopefully before the child hits puberty.

Because, contrary to most educators’ beliefs, handwriting is not the same as typing. Nor is printing / manuscript writing the same as cursive writing, but that’s another kettle.

Somehow, sometime, a huge disjointment happened between scholarly researchers and educators. In medicine, the findings of researchers tend to take 10-15 years until they start to be believed and implemented in medical practice. In education… it seems that even findings cemented by Nobel prizes 100 years ago are alien to the ranks of educators. It didn’t used to be like that. I don’t know when educators became distrustful of data and science. When exactly did they start to substitute evidence with “feels right” and “it’s our school’s philosophy”. When did they start using “research shows… ” every other sentence without being able to produce a single item, name, citation, paper, anything of said research. When did the educators become so… uneducated. I could write (and rant!) a lot about the subject of handwriting or about what exactly a Masters in Education teaches the educators. But I’m so tired of it before I even begun because I’m doing it for a while now and it’s exhausting. It takes an incredible amount of effort, at least for me, to bring the matter of writing so genteelly, tactfully, and non-threateningly to the attention of the fragile ego of the powers that be in charge of the education of the next generation. Yes, yes, there must be rarae aves among the educators who actually teach and do listen to or read papers on education from peer-reviewed journals; but I didn’t find them. I wonder who the research in education is for, if neither the educators nor policy makers have any clue about it…

Here is another piece of education research which will probably go unremarked by the ones it is intended for, i.e. educators and policy makers. Mueller & Oppenheimer (2014) took a closer look at the note-taking habits of 65 Princeton and 260 UCLA students. The students were instructed to take notes in their usual classroom style from 5 x >15 min long TED talks, which were “interesting but not common knowledge” (p. 1160). Afterwards, the subjects completed a hard working-memory task and answered factual and conceptual questions about the content of the “lectures”.

The students who took notes in writing (I’ll call them longhanders) performed significantly better at conceptual questions about the lecture content that the ones who typed on laptops (typers). The researchers noticed that the typers tend to write verbatim what it’s being said, whereas the longhanders don’t do that, which corresponds directly with their performance. In their words,

“laptop note takers’ tendency to transcribe lectures verbatim rather than processing information and reframing it in their own words is detrimental to learning.” (Abstract).

Because typing is faster than writing, the typers can afford to not think of what they type and be in a full scribe mode with the brain elsewhere and not listening to a single word of the lecture (believe me, I know, both as a student and as a University professor). Contrary to that, the longhanders cannot write verbatim and must process the information to extract what’s relevant. In the words of cognitive psychologists everywhere and present in every cognitive psychology textbook written over the last 70 years: depth of processing facilitates learning. Maybe that could be taught in a Masters of Education…

Pet peeves aside, the next step in the today’s paper was to see if you force the typers to forgo the verbatim note-taking and do some information processing might improve learning. It did not, presumably because “the instruction to not take verbatim notes was completely ineffective at reducing verbatim content (p = .97)” (p. 1163).

The laptop typers did take more notes though, by word count. So in the next study, the researchers asked the question “If allowed to study their notes, will the typers benefit from their more voluminous notes and show better performance?” This time the researchers made 4 x 7-min long lectures on bats, bread, vaccines, and respiration and tested them 1 week alter. The results? The longhanders who studied performed the best. The verbatim typers performed the worst, particularly on conceptual versus factual questions, despite having more notes.

For the sake of truth and in the spirit of the overall objectivity of this blog, I should note that the paper is not very well done. It has many errors, some of which were statistical and corrected in a Corrigendum, some of which are methodological and can be addressed by a bigger study with more carefully parsed out controls and more controlled conditions, or at least using the same stimuli across studies. Nevertheless, at least one finding is robust as it was replicated across all their studies:

Teachers, teach handwriting! No more “Of course we teach writing, just…, just not now, not today, not this year, not so soon, perhaps not until the child is a teenager, not this grade, not my responsibility, not required, not me…”. 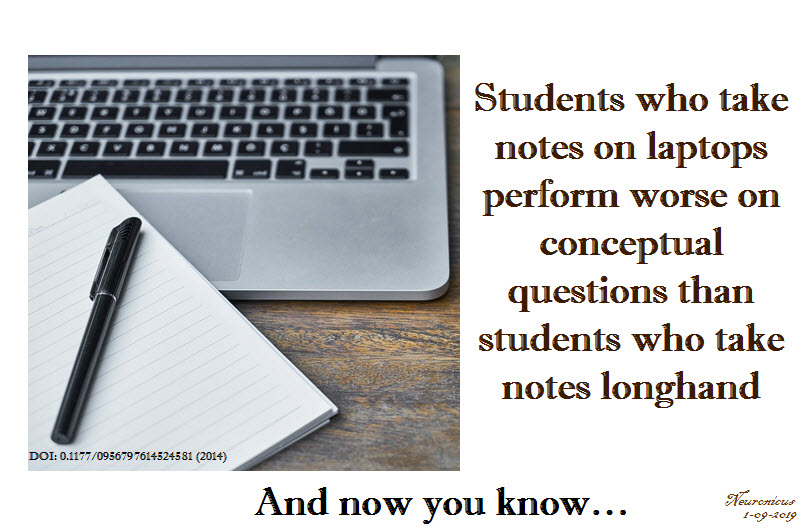 P. S. Some of my followers pointed me to a new preregistered study that failed to replicate this paper (thanks, followers!). Urry et al. (2019) found that the typers have more words and take notes verbatim, just as Mueller & Oppenheimer (2014) found, but this did not benefit the typers, as there wasn’t any difference between conditions when it came to learning without study.

The authors did not address the notion that “depth of processing facilitates learning” though, a notion which is now theory because it has been replicated ad nauseam in hundreds of thousands of papers. Perhaps both papers can be reconciled if a third study were to parse out the attention component of the experiments by, perhaps, introspection questionnaires. What I mean is that the typers can do mindless transcription and there is no depth of processing, resulting in the Mueller & Oppenheimer (2014) observation or they can actually pay attention to what they type and then there is depth of processing, in which case we have Urry et al. (2019) findings. But the longhanders have no choice but to pay attention because they cannot write verbatim, so we’re back to square one, in my mind, that longhanders will do better overall. Handwriting your notes is the safer bet for retention then, because your attention component is not voluntary, but required for the task, as it were, at hand.