Science has trends, like everything else. Some are longer or shorter lived, depending on how many astonishing discoveries are linked to that given subject. The 2000’s were unquestionably the years of the DNA. Many a grant have been written (and granted) for whole-genome surveys of this and that. Alternative splicing followed. The ’10s saw the rise of various -omics: transcriptomics, metabolomics, proteomics etc. Then everybody and his mamma got on the cart of epigenetics. With a side of immune stuff. Now, move aside epigenetics, here comes the microbiome. And CRISPR.

That is not to say that the not so hip subjects of the bygone years are thoroughly squeezed of knowledge and we throw them aside like some dry dead end and never touch them again. Not at all, not a bit. The trends only mark the momentary believes of the purse holders about which direction the next panaceum universalis will jump from.

Here comes a groundbreaking paper on the gut microbiome. It’s groundbreaking because it comes with a cure for systemic lupus erythematosus (SLE). Possibly autoimmune hepatitis and others autoimmune diseases as well.

An autoimmune disease is a terrible malady that is often incurable and sometimes deadly. It happens when the immune system starts attacking the body. One hypothesis as to why that happens posits that after a particular infection, maybe a particularly nasty one, the immune system doesn’t stop attacking, but now in the absence of an enemy it turns on its own body in genetically susceptible individuals.

Vieira et al. (2018) worked with genetically susceptible mice. And the bombshell comes right there in the first page: after treatment with an oral antibiotic (vancomycin or ampicillin, but not neomycin), mice genetically designed to develop lupus had lower “mortality, lupus-related autoantibodies, and autoimmune manifestations” (p. 1156). Then the researchers took a closer look at the bodies of these mice and observed that 82% of the mice had spleens and livers infected with Enterococcus gallinarum, a gut bacterium that should stay in the gut. But this bacterium is capable of weakening the gut barriers by loosening the tightness of the junctions between gut cells and then migrate to liver, spleen, and lymph nodes. Its high abundance in these places triggers a systemic immune response. Then the authors force-fed some germ-free mice with E. galinarum and saw that the mice developed systemic autoimmune pathology.

As if that’s not enough of a news story, the researchers developed a vaccine against this bacterium. The vaccine is very specific (being made of heat-killed E. gallinarum) and results in reduced levels of serum autoantibodies and prolonged survival rate in the lupus-prone mice.

So people don’t quibble, and rightly so, that those are rodents and humans are not (well, most of them, anyway), the authors looked at the liver biopsies of three humans with SLE and five with autoimmune hepatitis (AIH). They were positive for E. gallinarum, but the controls, i. e. healthy humans, were not. Also, when healthy human liver cells were stimulated with E. gallinarum they displayed autoimmune responses, just like in the murine cells. Finally, you don’t have to undergo a liver biopsy to see if you’re infected with E. gallinarum, just a specific blood test to see if you have increased antibody titers against this bug (or its RNA) as most SLE and AIH patients did.

Needless to say, I am extremely happy with this paper. Who wouldn’t be?! It’s a cure paper! I know, I know, they don’t say that, but what does this sound to you?:

Call it a very promising cure or a highly effective treatment if you like, but it stares you in the face for what it is as it did the researchers who already patented their stuff and are currently conducting clinical trials. 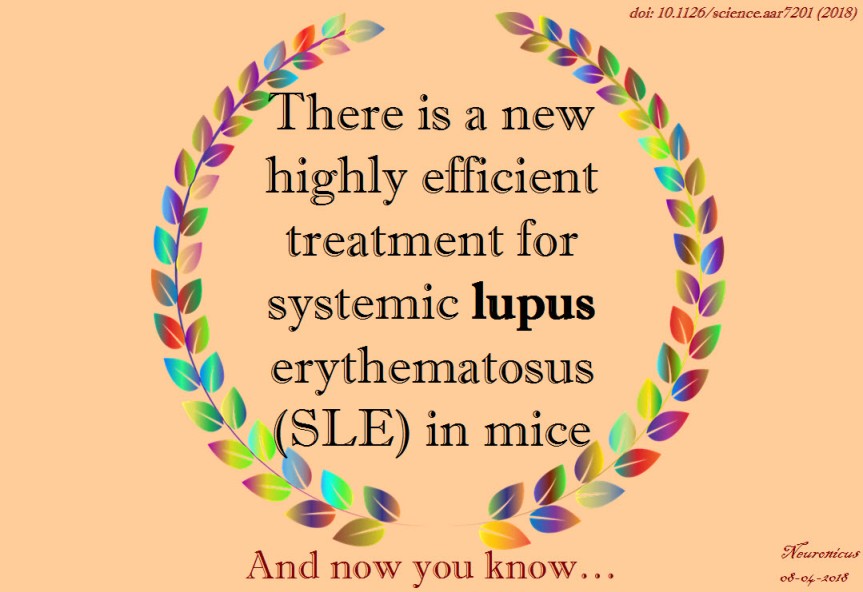