I was looking for what kills coronaviruses and I found this little gem in a paper by Walker & Ko (2007):

“MHV coronavirus was easily inactivated in PBS with 0.01% Tween but was relatively stable when suspended in MEM with 10% FBS”.

The paper in itself is on a different subject: comparing survival rate of the infectious agents after exposure to UV light. The one sentence about Tween was put in to emphasize differences between the infectious agents. The actual point of the paper is that while the bacteriophage MS2 and the respiratory adenovirus serotype 2 were not affected too much by UV, the murine hepatitis coronavirus was. Namely, after exposure to a dose of 599 microW s/cm2 of 254 nm UV, the coronavirus survival was only 12.2 % +/- 7.2, but to reduce the MS2 and adenovirus survival rate to around 32%, a much higher dose of UV of 2608 microW s/cm2 was needed (see Table).

The infectious agents were aerosolized. This is important because the “UV susceptibility is higher in viral aerosols than in viral liquid suspensions” (p. 5464).

Of extreme importance: DO NOT SHINE UV ON SKIN! It will harm you more than it will harm the virus:

Nor is cell culture my field, so I’m definitely not an expert though I have learned how to do it as a matter of principle because it keeps happening around me and in the papers I read. So perhaps the fact that Tween kills coronaviruses might be common knowledge for a good portion of the molecular biologists and immunologists, but maybe not for everybody. So here you go: 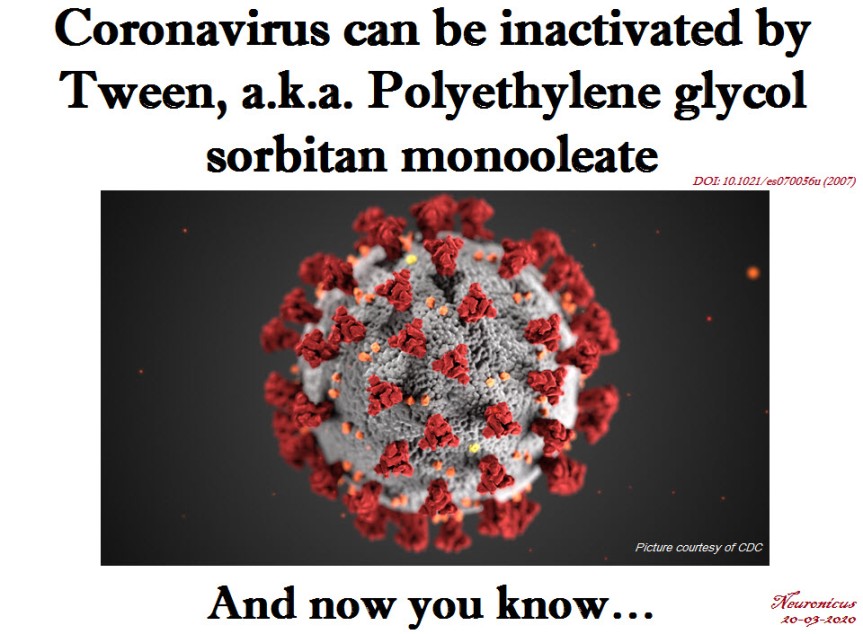 P.S. As soon as I published, I have been thoroughly (and repeatedly!) informed that every scientist that works with viruses knows that Tween kills coronaviruses. Because… drum roll… Tween is a soap. Duh! And we know how soap kills viruses, by dissolving their protective cover. Oh well :). I’d rather be chided for repeating well-known facts than for spreading disinformation.