My first break after the morning chores was spent lucratively on social media. I say lucratively because I found this gem in my Twitter feed: 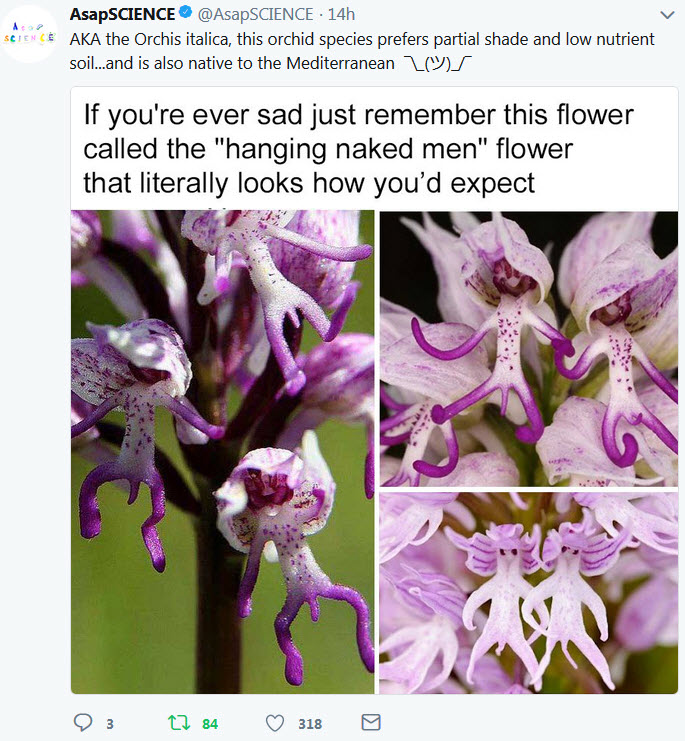 Who says social media is bad for you? Besides me and many other professionals, that is.

Naturally, as any 6 year old would, I felt intrigued by the orchid’s appearance and wanted to know more about it because pareidolia is strong with this one. To my surprise, a quick PubMed search revealed 15 serious publications about the genes of this plant (oh, silly me, I shouldn’t be surprised). Most of these papers are authored by Italian researchers, obviously. Not because of what you think, dirty mind, but (probably) because the orchid is widespread in Italy, as the species name indicates. All of these papers dealt with the genetics and the transcriptome of the plant. Since I have already covered the transcriptome of tomato in the previous post I thought to let these papers be and give you, my reader, a breather from the world of heavy trascriptomics.

Instead, the self-evident name of the plant and its visually striking flower got me wondering if it was used as a cure for impotence or some other ailments of the male reproductive organs as part of the doctrine of signatures wave. Let me explain. Back in the 1500s, a guy called Theophrastus von Hohenheim, a.k.a. Paracelsus posited that plants that look like an organ are good for treating diseases of that organ. This led to the practice called doctrine of signatures, meaning the healers went gallivanting in the fields in search of various plants that resemble or ‘have a signature of’ some part of human anatomy, pluck it, ground it, and give it to the suffering patients. Needless to say – or perhaps not needless, given the increase in pseudoscience bull lately – this assumption is not only false, but also dangerous. Sure, eating walnuts to help your brain manage stress because walnuts look like brains may not make you less stressed but will not harm you either. Giving birthwort to expectant mothers on the other hand may very well end up with orphaned kids.

Sure enough, it looks like even before Paracelsus, the Naked Man orchid’s root was ground up and eaten as aphrodisiac or as erectile dysfunction cure in the entire Mediterranean basin, from Spain to Turkey, from Sicily to North Africa, which is the habitat of this plant. Luckily for the gentlemen in the Middle Ages, Orchis italica’s roots appear to be edible, or at least not toxic in the amounts ingested. I wish I could give you some original source for this information but I couldn’t find any that I could trust or in a language I could read.

For what is worth, it appears that although the species has been described by everybody with an intact fusiform gyrus (part of the brain responsible with, among other things, seeing faces where there aren’t), it was drawn formally by the famous botanist Heinrich Gustav Reichenbach in 1851. Alas, the internet is devoid of the exact volume where this momentous depiction took place, so I – and presumably you – were robbed of the pleasure of seeing how the plant was painted by someone with the most keen observational botanical eye. Reichenbach has drawn thousands upon thousands of plants in minute detail. So, even if I couldn’t find his plate for Orchis italica, I’ll leave you with some of his other works (excerpts from Vols 3, 21, 23 of Icon. Fl. Germ. Helv., see REFERENCE).