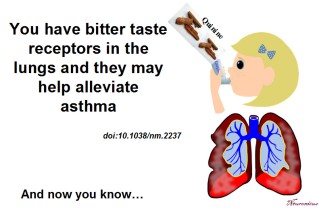 Asthma is an inflammatory disease of the lungs’ airways. The airway smooth muscle (ASM) expresses a large number of G protein-coupled receptors (GPCRs). The GPCRs are proteins bound to the cell membrane that sense what happens outside the cell and thus signal the cell to engage in appropriate responses. There are many, many types of GPCRs (in the upper hundreds) all over the body. Furthermore, alternative splicing (that is reshuffling parts of the gene that codes for a protein in such a way that you can get several different proteins from the same gene) may produce new types.

In an a effort to characterize the GPCRs in the ASM in the hope of finding an asthma pharmacological target, Einstein et al. (2008) found many more types of these receptors than previously thought, produced mainly by alternative splicing. In a subsequent study, the same group found out that some of these GPCRs are the same GPCRs that are expressed by your tongue in order to taste bitterness (Desphande et al., 2010)! The researchers were not expecting this.

Moreover, the bitter receptors (called TAS2Rs) in the lungs are fully functional, that is they respond to bitter substances like quinine. The response is, surprisingly, that of relaxation of the airways. It’s surprising because the role of bitter receptors in the tongue is to signal avoidance of bitter foods, because they usually contain toxins. So Desphande et al. (2010) (and anyone else in their shoes) would have expected a similar role for the bitter receptors in the lungs: that is, upon smelling something bitter the airways would close to prevent further poisoning. The data proved this expectation to be wrong.

The work so far has been done in isolated human cells. If quinine relaxes the ASM in an Petri dish, would it do so also when the ASM is still attached to its owner? So the researchers gave some bitter inhalants to some mice who had asthma and this treatment DECREASED the airway obstruction in a dose-dependent manner.

Asthma hits 300 million people worldwide and more than a quarter million die of it per year. So this research sparks great hopes for a new treatment direction.